House voted 230-197 to charge Trump with abuse of power and 229-198 to charge him with obstruction of Congress.

A majority of lawmakers in the US House of Representatives voted on Wednesday to impeach President Donald Trump on a charge of abusing his power by trying to pressure Ukraine to investigate a political rival.

Not a single Republican voted for either article - a fact the White House seized on to portray the Democrats’ impeachment drive as motivated by political bias.

The issue will now pass to the Senate which will hold a trial on whether to convict and remove Trump from office. 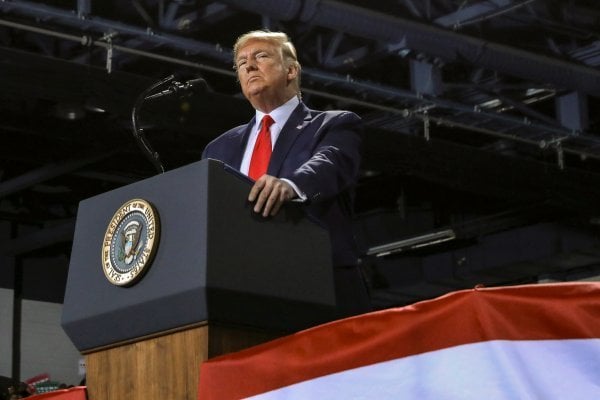 But given the Republicans hold the Senate majority and two thirds of senators would need to vote for removal it is very unlikely to happen.

With U.S. President Donald Trump impeached by the House of Representatives, his trial is now set to dominate the friendlier Republican-held Senate but what those proceedings will look like and when, are far from certain.

The House approved along near party lines two articles of impeachment against Trump on Wednesday evening: abuse of power and obstruction of Congress, making him just the third president in U.S. history to be impeached.

The first charge is related to Trump's repeated attempts to get Ukraine to publicly declare criminal investigations into Democratic presidential front-runner Joe Biden, and his son, Hunter, as well as allegations that it was Kyiv, not Russia, who meddled in the 2016 U.S. elections. The obstruction article is centered on the president's refusal to cooperate with the investigation and his directive that top officials do the same.

Shortly after the House approved the measures, House Speaker Nancy Pelosi indicated she would hold off on sending the articles to the Senate until the chamber clarifies the rules under which they will be tried.

"I would hope that that would be soon," she said, tempering expectations that proceedings will begin quickly next month. "So far we haven't seen anything that looks fair to us."

She referred in part to Senate Majority Leader Mitch McConnell's admission on Tuesday that he will not be "an impartial juror."

McConnell said last week that "everything" he does with respect to the impeachment trial will be coordinated with the White House counsel, adding "there will be no difference between the president's position and our position."

McConnell took to the Senate floor Thursday, accusing Pelosi and House Democrats of having "cold feet in front of the entire country," alleging the case assembled in the House fails to adequately demonstrate Trump committed high crimes and misdemeanors -- the constitutional bar for removing a sitting president from office.

"House Democrats may be too afraid, too afraid to even transmit their shoddy work product to the Senate," he said.

Asked if she runs the risk of Republicans getting the upper-hand if she holds the articles up too long, Pelosi brushed off the suggestion, saying, "Frankly, I don't care what the Republicans say."

Currently, the details of any prospective Senate trial are unknown, including whether witnesses will be called, how long it will run, or when and if it will begin. And partisan fighting within the chamber looks set to harden party lines.

McConnell and Minority Leader Chuck Schumer traded shots during dueling floor speeches on Thursday with Schumer pushing back on the Republican's suggestion that Democrats are stalling out of fear.

"Leader McConnell is plotting the most rushed, least thorough and most unfair impeachment trial in modern history. His plan to prevent House managers from calling witnesses to prove their case is a dramatic break from precedent," he said.

But McConnell and Republicans have so far declined to agree to any witnesses taking part in the trial, in preference for having a quick vote on the charges.

James Clyburn, the third highest-ranking House Democrat, suggested Thursday that the House could forestall on transmitting the articles "as long as it takes" until the Senate guarantees an impartial trial.

"Until we can get some assurances from the majority leader that he is going to allow for a fair and impartial and trial to take place, we would be crazy to walk in there knowing he has set up a kangaroo court," the Democratic whip told CNN, referring to McConnell.

Whatever form the Senate trial takes, however, Trump is almost certain to be acquitted in the chamber where his party controls 53 of its 100 seats. His removal would require a two-thirds vote, a seemingly impossible task given Republicans' uniform backing of the president.