I’m not siding with anybody on Syria, Trump says

Trump has faced mounting pressure in Washington after he announced that the US would pull back its forces in Syria ahead of Turkish operation.

US President Donald Trump said Monday he was not "siding with anybody" on Syria after his decision to pull back troops.

"I am not siding with anybody. We've been in Syria for many years. Syria was supposed to be a short-term hit. We were supposed to be in and out," Trump said during a press conference at the White House, adding he has "a good relationship" with his Turkish counterpart Recep Tayyip Erdoğan. 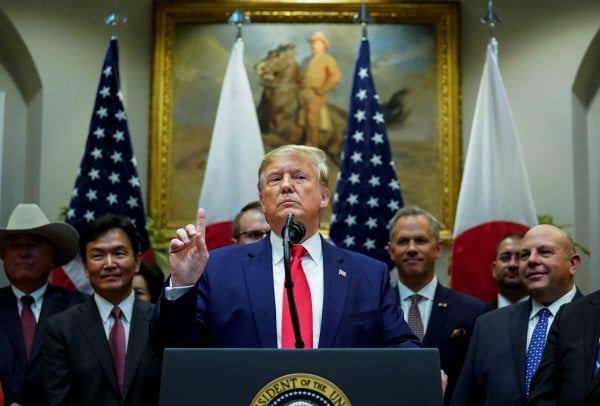 In his remarks, the US president said there were just 50 troops in the area where Ankara was planning to carry out the operation and did not want them to get hurt.

"I think there is a lot of pressure on Turkey. They have been fighting with the PKK for many years," said Trump, adding the former Obama administration started the dispute and "natural war" between Turkey and the PKK, citing reports.

Trump blames Obama for allying US with PKK

'When President Obama took the PKK, that’s a tough deal, because that’s been a mortal enemy of Turkey,' Trump says U.S. President Donald Trump ripped his predecessor Wednesday for what he said was the overt choice to partner with the PKK terror group as Turkey begins Operation Peace Spring in northern Syria.

"When President [Barack] Obama took the PKK, when they bring in PKK, that’s a tough deal, because that’s been a mortal enemy of Turkey," Trump told reporters at the White House. "So when you bring them in into a partnership, it’s a tough situation. It’s tough for Turkey."

Trump announced Sunday a pullback of U.S. forces from their positions in northern Syria ahead of Turkey's operation.

Turkey announced launch of Operation Peace Spring east of the Euphrates River in northern Syria to secure its borders by eliminating terror elements to ensure the safe return of Syrian refugees and Syria’s territorial integrity.

Turkey has said the terrorist group PKK and its extension the YPG/PYD, constitute the biggest threat to Syria’s future, jeopardizing the country’s territorial integrity and unitary structure.

Turkey has also stressed that supporting terrorists under the pretext of fighting Daesh is unacceptable.

Turkey has a 566-mile (911-kilometer) border with Syria and it has long decried the threat from terrorists east of the Euphrates and the formation of a “terrorist corridor” there.

Turkey plans to resettle 2 million Syrians in a 19-milie (30-kilometer) wide safe zone to be set up in Syria, stretching from the Euphrates River to the Iraqi border, including Manbij. However, the presence of terror groups such as the PKK, PYD, and YPG risk its formation.

The two operations were in line with the country’s right to self-defense borne out of international law, UN Security Council resolutions, especially no. 1624 (2005), 2170 (2014) and 2178 (2014), and under the right to self-defense under Article 51 of the UN Charter, while being respectful of Syria’s territorial integrity.

During Operation Euphrates Shield, Turkish forces neutralized 3,060 Daesh terrorists. Turkey has suffered greatly from Daesh attacks inside the country. More than 300 people have been killed in attacks claimed by Daesh in Turkey, where the terrorist group has targeted civilians in suicide bombings and armed attacks in recent years.

In its more than 30-year terror campaign against Turkey, the PKK -- listed as a terrorist organization by Turkey, the U.S. and the EU -- has been responsible for the deaths of 40,000 people, including women, children, and infants. The terror group YPG has rebranded itself as the Syrian Democratic Forces (SDF) to have the necessary legitimacy it needs for a seat at the Syrian negotiation table, a former U.S. commander said in 2018.

The words of former U.S. Special Operations Command commander Raymond Thomas are in focus again as the U.S. administration threatened Turkey this week with economic ruin if "any unforced or unnecessary fighting" is made against the YPG/PKK.

That threat insultingly painted all Kurds with the same broad terror brush.

The SDF brand has been extensively used by the Western governments and media to dissociate YPG with the PKK, which is recognized as a terror outfit by Turkey, the U.S. and the European Union.

Thomas explained at the Aspen Security Forum "the most discussed and the most misunderstood" evolution with U.S counterpart in Syria is the so-called SDF. He said the terror group “came about that name because at one point and time I dealt with them directly.”

The group “formally called themselves the YPG, who the Turks would say equated to the PKK,” he said. “You are dealing with a terrorist enemy of mine. How can you do that to an ally?"

He said he was lucky to have Special Presidential Envoy for the Global Coalition to Counter [Daesh], Brett McGurk, with him, and they gave the YPG the idea to change their moniker. McGurk, resigned his position shortly after the U.S. President Donald Trump announced his decision to withdraw troops from Syria in 2018.

The terror group wanted the legitimacy Thomas could not deliver. And, it wanted a seat at the Syrian table in Geneva and later Astana, which would have been impossible with the terror designation being the main force in northern Syria.

"In about a day's notice they [YPG] declared that they were the Syrian Democratic Forces," the commander said with a laughter. "I thought it was a stroke of brains to put democracy in there somewhere but it gave them a little bit of credibility."

"So we paired with them militarily, Brett McGurk was able to keep them in the conversation and allow them the necessary legitimacy to be good partners for us," he added.

A terror campaign waged by the PKK against Turkey for more than 30 years, resulted in the deaths of nearly 40,000 people.

A 2018 UN report as well as many other independent reports by human rights groups such as the Human Rights Watch confirmed forceful recruitment and the use of children by the YPG/PKK increased nearly five-fold, from 46 to 224, between 2016-2017.

672 Görüntülenme
i’m not siding with anybody syria trump says
-->